A Bit of Plumbers History 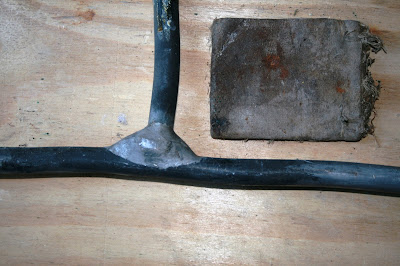 When I was an apprentice {1980 - 1984} with I.C.I .we did a lot of work with lead pipes. Indeed it was still a large part of the Plumbing City & Guilds syllabus back then. I.C.I. owned an estate of houses adjacent to their factory all of which were plumbed out entirely in lead pipe. Interestingly these streets, two straight roads and a crescent, if viewed from above spelt I.C.I.
We spent a lot of time repairing lead pipes and doing wiped joints just like this one in my picture in those houses. Some of the Plumbers who I was apprenticed to actually lived on 'The Estate' as it was known. The square thing in the picture is one of my old wiping cloths with which we moulded the molten solder into shape. You had to be fairly quick or the lead and tin which made up wiping solder would start to separate making it hard to work with. We are currently re-plumbing a big old six bedroom house on the Wirral and have pulled a lot of old lead pipe out. I saved this bit as it brought back many memories. I was aching all over after lugging all the lead out as well as a cast iron bath. The Plumbers in those days must have been very strong men.
Posted by Paul Dooley at 00:49