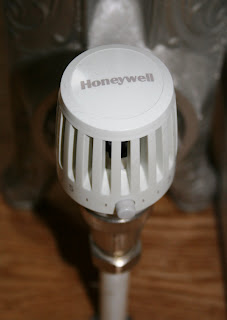 Correct controls on central heating systems are vital. Everyday we see systems with inadequate or incorrect controls which do not conform to the building regulations. Gas and oil which are the main fuels for heating systems are expensive. Incorrect or inadequate controls mean increased fuel bills.
We tend to favour Honeywell controls for all of our installations as their range meets most of our needs. Occasionally we use Drayton or Danfoss controls too.
We are always happy to discuss and advise upon the most suitable and energy efficient ways of controlling your heating and hot water systems. Some energy saving controls attract a reduced rate of VAT and most will pay back your outlay in a short space of time.
Posted by Paul Dooley at 09:52 No comments: 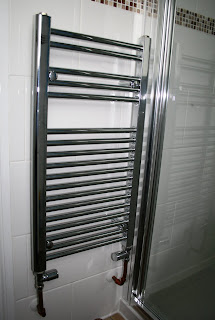 A straight chrome towel rail fitted perfectly in this narrow space in an en suite bathroom, between the doorway and the entrance to the shower cubicle. Space was at a premium and the customers thought they wouldn't be able to fit one in. We can supply and fit a large range of towel rails in straight or curved design and white or chrome finish.

This particular bathroom was stripped out completely. We then replastered the walls and lined the shower area with waterproof tiling board. All service and waste pipes were concealed and walls and floor were fully tiled using waterproof adhesive and sealing with waterproof grout. The tiles were white, broken up with a central border.

The sanitaryware was from Ideal Standard's 'Space' range which we find perfect for small bathrooms. All work was carried out by our own engineers. 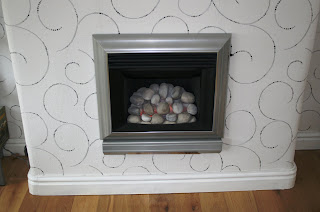 We created a feeling of 'more space' in this lounge by removing the old fire, surround and hearth.
The opening was remodelled to suit this new Valor LFE gas fire with pebbles. This involved bricking up the base of the builders opening and raising the lintel at the top. Some patch plasterwork was also involved. The old gas supply pipe was rerouted and fully concealed.
Posted by Paul Dooley at 02:53 No comments: 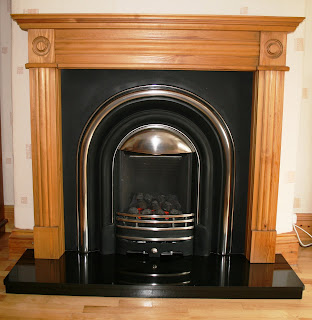 We supply and install all manner of gas fires, ranging from basic radiant models for social landlords to the latest state of the art remote control models for discerning homeowners.
We also take care of any associated building work when the opening may need remodelling, surrounds need fitting or flue liners need installing.
There is no need to be sourcing other trades such as bricklayers, plasterers and roofers as we take care of everything.
We can also advise on suitability of chimneys and terminals as not all fires are compatible with all chimneys.
Our suppliers have a wide range of fires and surrounds from leading manufacturers such as Valor, Robinson Willey, Flavel, Baxi & Be Modern.
As Gas Safe Registered installers we can supply and fit all of these products at competitive prices.
Please call us if you would like a brochure or any advice on such matters.
Posted by Paul Dooley at 02:30 No comments:

Thinking of Changing Your Boiler? 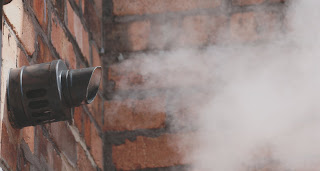 The highly respected consumer watchdog magazine 'Which' reports that independant heating companies are much more reasonable in price than British Gas. Well I could have told them that a long time ago.
'Which' decided to investigate this matter after many of its readers pointed out the considerably discrepancies between British Gas quotes and those of local independant heating installers who are often near to half the price. Much of British Gas's installation work is given out to sub contractors too........ The picture is the flue of an Ideal 'Isar' HE35 condensing combination boiler. The white plume of flue gas indicates that the appliance is in condensing mode and running at its most efficient. It is one of the many we we have installed. Boiler swaps are one of our specialities. If you are thinking of changing your boiler and have had what you consider a high quote off Britsh Gas or anyone else for that matter then you need to speak to us.
Posted by Paul Dooley at 06:03 No comments: 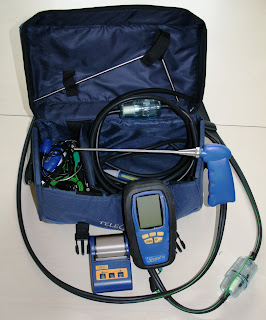 January 22nd 2009. A CO {Carbon Monoxide} alarm had gone off in a private residence in South Liverpool. It was sited outside of a compartment, on the first floor landing, which housed the central heating boiler. Adjacent to this cupboard were four bedrooms. Directly above it the loft had been converted into a fifth bedroom. All rooms were occupied.
The householder rang Transco to report the incident. Their engineer duly arrived, isolated the boiler and attached a warning notice. He advised the householder to call a C.O.R.G.I. registered gas installer to check the boiler. I received that call at about 10.00pm that evening and arranged to visit the property the following day.
Upon arrival we first looked at the generally installation of the appliance. The boiler was a room sealed model with an extended flue system. The flue rose vertically up into what had previously been the loft. It had originally terminated at roof level. When the loft had been converted the flue had been rerouted beneath the new floor of the loft conversion to terminate horizontally to the rear elevation of the property. This work had been carried out by unregistered installers. The flue terminal was now passing through the timber soffit and touching the plastic gutter. The minimum distance it should have been from the timber soffit was 200mm. The minimum distance it should have been from the plastic gutter was 75mm.
Next we looked to see if there was any service history with the appliance. The householder said it was last serviced three years previously. The service engineer hadn’t noted the incorrectly routed flue and terminal which suggests he wasn’t very thorough. We noticed some staining around the flue hood of the appliance suggesting leakage of combustion products.
We reinstated the gas supply to the boiler, restarted it and carried out an ambient CO test in accordance with British Standard 7967 using our flue gas analyser {pictured above} taking readings from around the compartment area. Within less than two minutes the gas analyser was warning us of high levels of CO in the atmosphere at above 50 ppm {part per million}. These products of combustion were escaping from a perished gasket joint on the flue hood of the boiler, where we had noted staining. This is what had triggered the householders audible CO alarm.
The manufacturers servicing instruction of the appliance clearly stated that 3 gaskets needed to be changed during a service. This hadn’t been done. The price of the gaskets was just £12.00.
Readings taken from the appliance sample point showed it was producing potentially deadly levels of CO of 9874 parts per million {PPM}.
At 6400ppm severe medical symptoms can occur within 1 – 2 minutes and fatal consequences within 15 minutes. At 12800ppm immediate medical symptoms and fatal consequences can occur within 1 – 3 minutes. This appliance was mid way between the two. The industry category would be IMMEDIATELY DANGEROUS.
As well as being very dirty due to lack of regular servicing the appliance had a damaged burner. This coupled with the incorrectly installed flue convinced the householder to replace it with a modern equivalent high efficiency appliance.
Posted by Paul Dooley at 08:28 No comments: 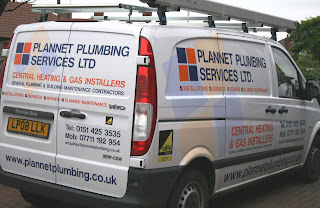 using some Mercedes 'Vito' vans which we find perfect for the job. We carry all of the common parts and fittings we use which makes more efficient use of our time. I don't like standing in queues in merchants. If the part is on board it means we can complete most maintenance calls in one visit. This means less cost to the customer.
We can also get on a full heating pack comprising of boiler, radiators, controls, tube, or even a full bathroom suite etc. This means no waiting around for deliveries. We find our lettered vans one of the best forms of advertisement too.
Posted by Paul Dooley at 03:50 No comments:

Starting Out On The Road To Business 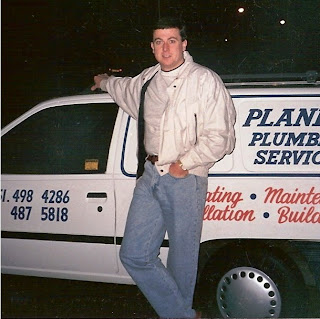 The last three months of my apprenticeship were spent on a placement with an outside contractor, to gain wider experience. The I.C.I. apprenticeship finished at the end of August 1984 and I was kept on by the contractor. However his workload was unpredictable. Worst still so was payment of wages. We parted company by November. Jobs were few and far between at that time unless you "Got on your bike" to London.
I decided to try my hand at starting my own business and quietly 'launched' in December 1984 aged just twenty.
In February 1989 I went into partnership with Jon Mitchell. We rebranded the business as Plannet Plumbing Services and began to expand.
Within a couple of years we had a small fleet of vans on the road and a busy office in Wavertree.
Posted by Paul Dooley at 12:36 No comments:

Starting Out On The Road Of Plumbing 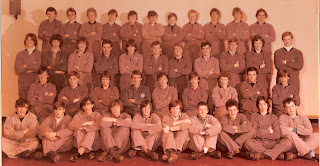 I started out in the Plumbing industry in September 1980 as a 16 year old apprentice with I.C.I. I am the handsome one in the bottom right hand corner! The bulk of the apprentices were Fitters, Instrument Articifers, Boiler Makers or Electricians. I was one of two Plumbers. It was a four year apprenticeship but with five years at day release college and night school. This was acheived by doing two years at college during the first year. Our time at I.C.I was split between their apprentice training school in Widnes and the site I was assigned to which was Castner Kellner Works in Runcorn. It was a good apprenticeship because as well as the factory / industrial work we maintained the I.C.I housing estate too where I learnt domestic work. After four years I was 'released' into the big wide world as a fully qualified Plumber.

This weblog has just been created.
Please revisit soon
Posted by Paul Dooley at 02:29 No comments: