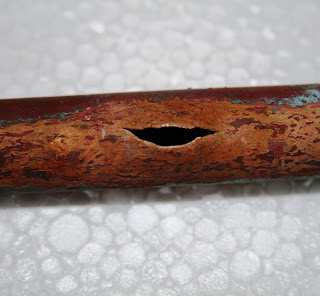 11/01/10 - A 15mm copper pipe which burst after being frozen in the recent cold weather. It was in a hotel we look after and was the hot water supply to a bar sink. It was routed through an unheated lean to/out building and should really have been insulated. Luckily it was fitted with a service valve so the staff were able to isolate it before it done any real damage.
When I first started out in business in 1984 burst pipe jobs were fairly common throughout the winter months. They were the typical 'Emergency' job associated with plumbing. Our winters were colder then, than in recent years and many properties didn't have central heating.
Today almost all homes have central heating and this coupled with the milder winters {until this present one} means burst pipes aren't as common. These days a central heating boiler which has broken down seems to be the new 'Emergency' though I haven't quite figured out why this is so yet? I guess that our society is becoming weaker and softer.
Posted by Paul Dooley at 14:58 No comments: