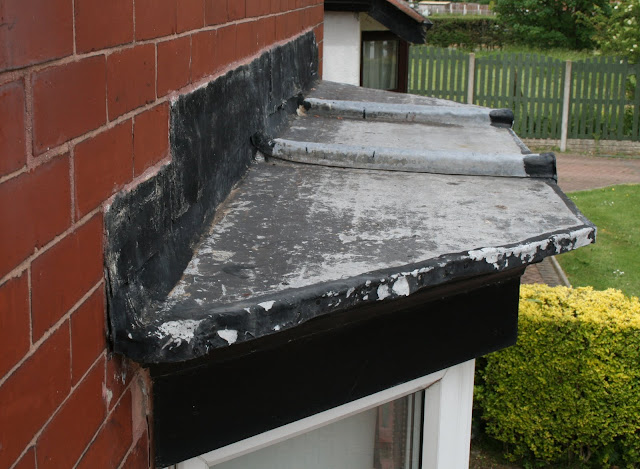 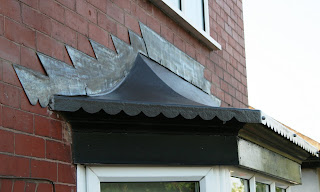 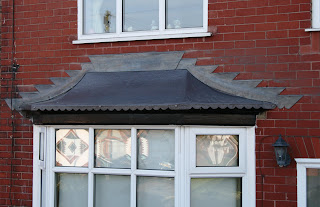 The first picture is a 'before' shot and shows a flat lead covering on a bay. There were two rolled joints which were badly positioned, the flashing where the bay meets the brickwork was poor and to make it all look worse it had been painted black.
Not many of the new generation of Plumbers can do lead work. Much of it has been claimed by roofers. A large part of my training consisted of working with lead. In those days if it was lead then it was Plumbers work whether it was pipes or roof flashings.
I dusted all my old tools off and the other two pictures show the finished result. The actual canopy was specially made from GRP to imitate lead. The cost to do this job all in lead was not viable. The flashings however all in code 4 lead. These days the flashings are pointed into the brickwork using a special grey, flexible sealant which is much better than mortar. Special stainless steel spring clips hold it in and again are much better that the old lead wedges. Finally it is all polished with patination oil which stops any staining.
The middle picture has been used in the new City & Guilds NVQ, level 2 Plumbing text book {page 23}. It was a pleasant surprise when the publishers / compilers asked to use it. It's nice to know that the Plumbing industry is keeping hold of lead work.
Only this weekend {24/06/2012} I was called to a "Water coming through my ceiling" leak. I correctly predicted over the phone that it was almost certainly a roof leak as we'd had a night of torrential rain. It actually turned out to be a lead valley at the intersection of two parts of the roof. Luckily it was a relatively easy repair.
Posted by Paul Dooley at 11:43