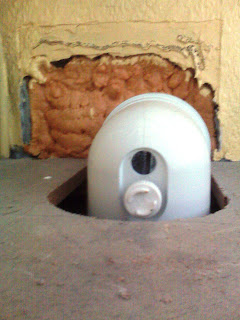 This was an installation by one of our former competitors. I say former as they are now, thankfully no longer in business. In reality they operated on a different level to us and to compare them to us, or to any reputable installer is like comparing fine art to creasoting....
It was a simple installation in a housing association property.
I was called to the property to, amongst other things investigate a report of poor hot water performance from the boiler. I knew straight away who was responsible as I pulled up outside the address. Even by their low standards it was still a shocker. The flue terminal of the new boiler was too close to an openable window. Inside the house one of the plugs was missing from the flue turret elbow {pictured}. Luckily it was the air in take rather than the flue gas outlet or it could have been fatal. Rather than neatly core drilling a hole for the flue an air brick had been smashed and filled with expanding foam {pictured}. The system controls didn't conform and weren't wired up correctly. The combustion had never been set on the boiler. They had left all of the rubbish and waste materials from the job up in the loft. The tenants floorboards had been butchered. The list goes on.....and on.......Whilst it wasn't the worst job I've ever seen it was certainly in the top 10.
We spent the best part of two days carrying out the remedial work and getting the system up and running as it should have been. Everything now conforms and is running efficiently. The tenant has the hot water flow he should have. It's a shame that in these very difficult times ridiculously low tenders are so readily accepted. It's not just in the social housing sector either the private sector is worst. A very apt saying springs to mind ~ If you think hiring a top quality engineer is expensive, then you should try hiring a cheap one!
Posted by Paul Dooley at 06:13 No comments: