Does our industry need anymore policing?
I remember way back in 1985 when I first registered with C.O.R.G.I. which then stood for the 'Council for the registration of gas installers. I'd been in business for about a year and like now trading conditions were difficult. CORGI, back then was an entirely voluntary trade association and cost £75 to join. An inspector came out had a look at a couple of your jobs, watched you perform a tightness test and checked you had a set of the British Standards relating to gas.  It was as simple as that.
I was a young pup of just 21 years of age trying to be better than a whole load of others just like me. I was installing full plumbing, heating and gas systems for a builder, in a street of houses in Bootle {Longfellow St} belonging to Merseyside Improved Homes who were one of the pioneering housing associations on Merseyside. Most of the street was getting renovated so I was able to take the inspector in any number of  houses I'd completed so he could check my work. Membership of CORGI helped me get on various tender lists and pick up commercial work I wouldn't have otherwise got as well as giving support and technical advice. It was a good move and one I'm glad I made though few members of the public had any idea what CORGI was in those days.
In 1991 it became mandatory for engineers who worked on gas to become registered and it helped tighten up the industry. Sadly CORGI lost sight of its core activities and as a result lost the contract to run the scheme. In 2008 Capita won the tender and have since operated the registration scheme in a much better way under the 'Gas Safe' banner.
There is currently talk about a 'Water Safe' scheme being implemented which would be another good step forward for the legitimate installers in the industry. The scheme is currently voluntary and recognises reputable Plumbers who hold formal qualifications,  have been assessed in the water regulations, passed the assessment and work to the correct standards. It allows them to self certify certain work too. We are members of this scheme. As Approved Plumbers we are are happy to answer any customer queries regarding water regulations, approved fittings, contamination, supplies or any related matters.
In view of some of the shocking workmanship and contraventions of  the water regulations we regularly see by unqualified 'Plumbers', well meaning 'have a go joiners' and so called 'multi skillers this scheme becoming mandatory should be welcomed. 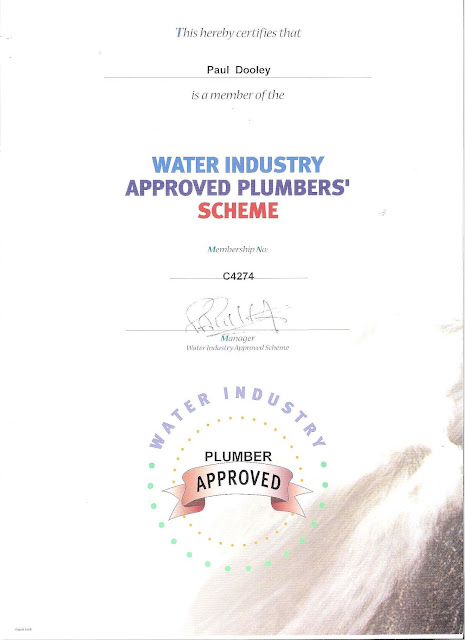 Easy If You Know How

Here's some pictures of a boiler breakdown from this morning {saturday}. Our customer was faced with a possible weekend of no heating and no hot water. Luckily he rang us and I was able to attend within the hour.
The boiler is an Ideal 'Isar' 30KW combination boiler that's around five years old. It was attempting to ignite before locking out and displaying the 'LF' fault code. 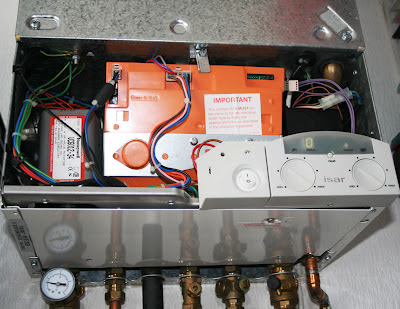 Here's the boiler with the front case and sealing panel both removed. 'LF' is a flame error fault code but it can be one of several faults. 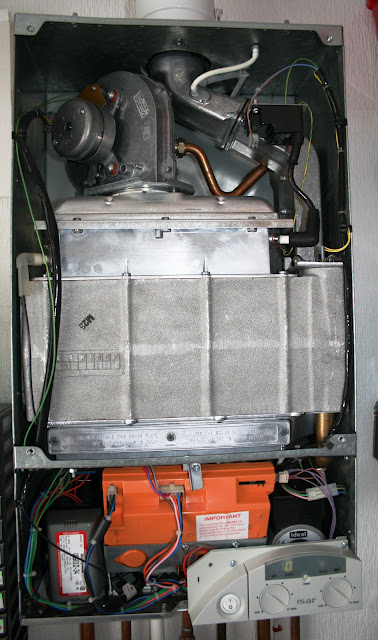 The first thing I check is the ignition electrode which is highlighted below. 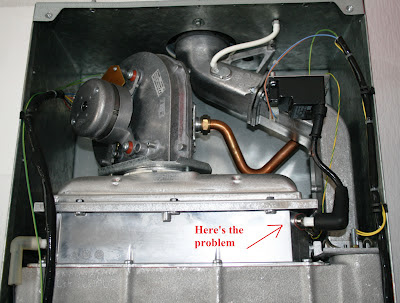 I was right first time. It has been distorted by heat making the  gap too large for the spark to bridge. We look after a lot of these boilers and carry a spares kit consisting of every part enabling us to fix them in a single visit. 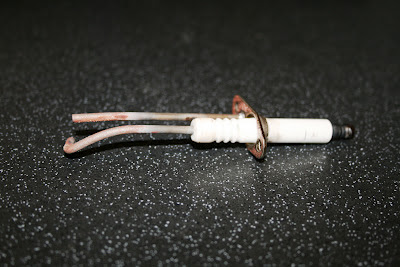 We don't just specialise in repairing certain brands of boiler; we can fault find and fix any for you. Please don't hesitate to call if you wish to discuss any such matters.
Posted by Paul Dooley at 14:50